Jonathan struggled with his self-esteem and addiction for years. His upbringing wasn’t easy- his mother passed when he was two and his father was relatively absent in his life. He experienced trauma early and he wasn’t able to openly talk about the abuse he suffered until after a couple tries in treatment. He was very used to the mentality of “show no weakness” and it wasn’t until a conversation with his sister in 2004 where he decided to seriously consider sobriety. He called his sister and told her he really felt like giving up and didn’t think he had much reason to live. She picked him up and showed him where he’d go for his first Narcotics Anonymous (NA) meeting the next day.

This most recent time in treatment at Mariners Inn is his seventh time in treatment, and Jonathan feels different. He said the first three times he went through treatment at various facilities he wasn’t really trying to apply what he learned to his life. “It wasn’t until the fourth time when I really took hold and wanted to start living my life,” he said. He experienced guilt, shame, pain, and the feeling that he had nothing to show for his time spent in treatment centers.

In 2019 Jonathan spent a year in and out of the hospital and had surgery to have his gallbladder removed. A while later he was diagnosed with prostate cancer. It threw him off completely. He had surgery in September of 2019 to have his prostate removed to take the cancer out. After the surgery, not knowing how it would all go, he started using again. A while later, he learned he was cancer free, and he could barely believe it. It was after this time he knew he was here for a reason, and he said that reason is to tell his story and to help other people.

In January 2020 he said he had a moment of clarity and he knew what he had to do- go back to
Mariners Inn and regroup. And that’s exactly what he did. “Life really means so much to me now. I choose to live today, no matter what. I needed to believe in me myself, you know?”

Jonathan spent time in our residential program and then in June 2020 he moved next door to recovery housing, and eventually got his own apartment with a beautiful view- something he never pictured for himself. People were seeing things in him that he finally started to see in himself.

“I’m doing things I never did…I’m communicating. And COVID-19 gave me more time to strengthen my foundation and think about me,” he said. “There’s no cure for this process, no graduation, but I’m enjoying it. I want to live, God’s will, and I want to help people,” he said. He also has seven grand babies that he adores, he said, and he’s been so lucky to have family support- he knows addiction can tear that apart.

“The fight continues, that’s why I stay humble and grateful. My previous treatments, I learned something each time…but Jonathan is the beautiful person you see now and I love him.” 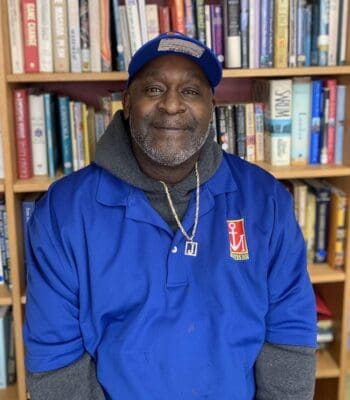