CATCHING UP WITH KWESI

Kwesi came to Mariners Inn in May 2015. He’s been living independently for over a year now after completing treatment and staying at Mariners Inn as part of the Mariners Inn Extended Residency (MER) program. We sat down and talked with him in January 2020 to see how he’s been doing.

What brought Kwesi to Mariners Inn in 2015 is not unusual; he struggled with heroin addiction for about 10 years. He started his road to recovery as a part of Mariners Inn’s Residential program, and started collecting tools to use as he progressed in his sobriety.

Through MER, Kwesi was able to stay at Mariners Inn until October 2018. While living at Mariners Inn, Kwesi earned his Associates of Arts and Sciences Degree at Wayne County Community College. In 2016, The Detroit Free Press interviewed him for an article about homeless students. He was quoted saying, “It took me eight years to get this degree, but now I’m feeling real good.”

Looking back on his experiences here he said, “It hit me hard. This place helped me build a solid foundation to succeed and be focused.”

Kwesi talked about how Mariners helped him to address all issues including his mental, physical and spiritual health. “This place helped me reconnect with my spirituality,” he emphasized.

Now, Kwesi has his own home and is the Chief Executive Officer of The King’s Way Enterprise, a digital marketing company that he started himself.

“Right now I am working on my company every day, doing stuff I love to do, and going to church,” he said. He also serves on a non-profit board and says he likes to cook and cut hair.

“I am constantly learning. I like cooking, helping people, listening to music…I spend a lot of time at Starbucks too,” he said. His favorite music artist is currently Fred Hammond, a gospel singer from Detroit.

He talked about how Mariners Inn helped him raise funds through a partnership with HandUp Detroit to buy a laptop so that he could have the proper tools to start his business.

Kwesi has stayed in touch with Mariners Inn as part of the alumni program, and he recently reached out to give back and volunteer to help other guys who deal with similar issues he has faced.

When asked what motivates him to stay on his path he replied, “Not coming back here; I stay not wanting to go backwards. Also, my family and keeping goals.”

For those struggling with addiction he suggested, “Look at where you’ve been and think about where you want to go; look at what you have and take inventory.” He also talked about gratefulness and practicing daily gratitude.

“It’s OK, don’t stress,” he said. “Definitely go to treatment if you struggle with homelessness or addiction and take advantage of the resources available to you.” 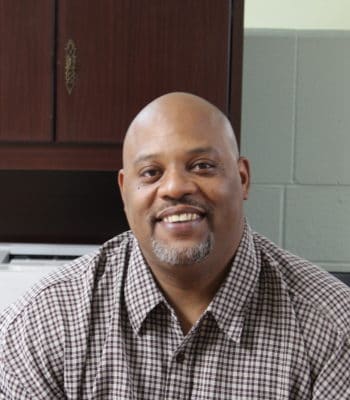