Maurice “Moe” Hunter is a resident in the Mariners Extended Residency (MER) Program. During his down time from the daily activities of Mariners Inn, Mr. Hunter can be found in the art room working on his mosaic masterpieces.

Mr. Hunter first got involved in drugs and alcohol in his early teens. Over time he gave up marijuana, but alcohol remained his drug of choice. Despite addiction to alcohol, he managed to keep a steady job and worked all his life.

Everything changed in 1983, when a girlfriend introduced him to crack cocaine. Mr. Hunter’s life spiraled out of control. He was imprisoned twice, and lost his home and his job to addiction. Desperate for help, he went through five treatment centers before he found Mariners Inn in 2005. He completed the Residential Treatment Program in January 2006 and was clean for the next two and-a-half years until depression about his life and recovery led him to relapse on his 50th birthday. 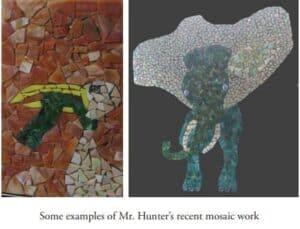 Mr. Hunter returned to Mariners Inn in December of 2009. After completing the Residential Treatment Program for the second time, he entered MER to work intensively on long-term self-sufficiency and recovery.

In MER, art is an important part of the therapeutic environment and many men are involved in creating mosaic projects, drawings, paintings, and collages. Ms. Deborah Migliazzo, a therapist and artist, encouraged Mr. Hunter to try the mosaic work. “All through school, I never liked art. I didn’t want to go, but she convinced me to try it just once”, he says. “At first, I didn’t really care for it”.

One of Mr. Hunter’s first projects was a mosaic in honor of his mother. The compliments he received on his work encouraged him to try some more projects. He began to enjoy the process of creating mosaic designs and now works in the art room until late at night when he has the time. Mr. Hunter has found that the contemplative nature of mosaic making has had a positive effect on his recovery. “I do a lot of thinking while I do it”, he says. “I had been asking God for something to do. I think this is one of the gift s He gave me. I love it.”