“I still had that mentality. I came here angry,” said Tajai, a young man, father of four, and recent graduate of Mariners Inn.

Like many individuals who find themselves at the doors of Mariners Inn, Tajai had a rough life growing up. With his father not in the picture and losing his mother at the age of 5, he only had his grandmother and life to raise him.

“I had to learn a lot of things on my own,” he said. “Without a male figure in your life, you really have to figure out things for yourself.”

To top this off, his secondary support system was quite toxic. He grew up hearing from others, including friends and family, that he wasn’t going to be successful, whether it be in life or in school. Often in trouble for fighting, he found himself associating with gangs and angry at the world. Early in our conversation he even said that at a point, “I felt like I didn’t have a soul.”

As a father, Tajai knew something had to change. It wasn’t until he found himself incarcerated and at the recommendation of someone around, he first heard of Mariners Inn. Not expecting much, Tajai came here not by court order, but by choice; “I was tired,” he said.

What happened here, only his smile can now show. “I learned it’s okay to be alone, it’s okay to be afraid. It’s like I was a wound, hurting inside, and they opened me, cut me, and let it bleed,” Taijai said.

Through confronting his own flaws, Tajai shared that his biggest fear would be his kids growing up like him, without a father. Approaching his treatment with this mentality, he was able to not only learn about himself, but to love himself.

“We don’t have to fit this male tough guy role, its okay to speak about your problems.” Through opening up with his counselors and building bonds with peers, Tajai was able to truly recognize himself for the first time.

“My spirit has more light now,” he said. “If you can’t admit your own problems, if you don’t want to help yourself, then no one will.”

Tajai’s recommendation to anyone coming into the program is to TAKE IT SERIOUS. You cannot do everything on your own. In recognizing his own strength and what he truly needs in the world, Tajai confidently graduated from Mariners Inn and looks forward to seeing what the new him can do. 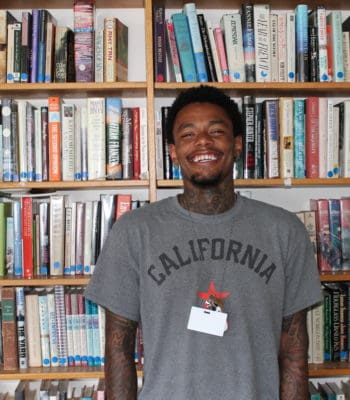